In honor of Mexico’s Dia de los Muertos (Day of the Dead), which officially begins at midnight, November’s Cousin Connection comes one day early. Coinciding with the the Catholic All Saints Day, and incorporating garish costumes resembling skeletons, Dia de los Muertos is not Mexican Halloween, but a much more elaborate version of Memorial Day in the U.S.

In Mexico, this year’s commemoration began a few days ago with a large parade including a salute to rescue workers who worked tirelessly to save family, friends, and fellow countrymen from the rubble of recent earthquakes.

When Pete, a Mexican friend from college, entered a Facebook post celebrating his recent connection to cousins he never knew he had, I decided that this week’s holiday is the perfect time to include it. 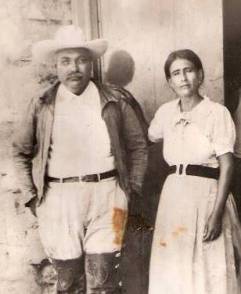 Pete tells his own story:

I have become obsessed with making a family tree. It did not just happen out of nowhere. It started when I submitted my son’s DNA to Ancestry.com. I wanted to show him his multi-ethnic background. We were not disappointed. He is from all over the world–every continent except Antarctica and Australia.

Ancestry told us that he is mostly Native American from the area of Zacatecas and Aguacalientes. His ethnicity estimate is also 24% Great Britain with Western Europe, the Iberian Peninsula, Scandinavia, Ireland, Finland, European Jewish, Polynesia, the Middle East, Senegal, and Africa North all vying for a slice of the genetic pie.

But this smorgasbord of the world is not what compelled me to create a family tree. It was a feature of Ancestry that I did not expect. Our DNA was matched with other people who submitted their DNA with Ancestry.

My father was the only member of his family who came to this country. That was in 1948. How could he have close relatives in this country? My mother was raised as an only child. I was the only Mexican in the world who did not have a cousin, an uncle, or an aunt. We held our family reunions inside a closet. But, on the bright side, there were more tamales for us during the holidays. We did not have to share them with relatives.

But who are these people that Ancestry claims are closely related to my family?

Did my father stray, and now the evidence is coming back Maury Povich style to say that “The DNA evidence is in, you are the father?” Did my mother’s parents have a secret child? Did I have a close relative from Mexico who came unannounced to Chicago in the 1930s?

I did some research and found that these two people listed on Ancestry are from Chicago. One was 73 years old. The other was in her 20s.

The older man eliminated my father. My father was not here 73 years ago. He was still in Mexico.

Was my mother’s lingering doubt that her parents are not her biological parents more than a doubt? Could she be related to this 73 year-old man?

I found records for the younger woman. She had been arrested a couple of times in her early 20s. We have to be related and share the arrested development gene. My line has proven that this gene exists. It lingered in me into my twenties.

She lives in a northern suburb of Chicago. The older man lived in an adjacent suburb. They lived near each other.

I went to Facebook. I found a connection between the two people. I began to develop a hypothesis. These were the biological relatives of my mother, who was adopted in 1934. Now, I need to apply science to prove my hypothesis. I need evidence.

I sent messages via Ancestry to both people. I did not receive a response. I tried again. I received the same result-no reply.

I began to create my tree. I spent about 200 hours in September researching for my tree. September is our month off for home school. I needed to make progress and uncover these connections in one month before I started in October with Geometry, U.S. Government, Spanish, and Language Arts for my 13-year-old son. He takes three other classes in the regular school system.

Our real family name may go back only a few generations. It may not be our real family name. Family legend has it that someone in the family line helped a gang rob a Zacatecas silver mine payroll. He then disappeared into another Mexican state with a new name and a richer, new life. I found nothing to prove or disprove that legend.

I did hit a dead end with the family lineage in the mid 19th century.

If my mother was adopted then there is another instant dead end. Could these two people be the key to answering the question about my mother’s biological parents?

Maybe my mother was not adopted although I have always believed in that theory. My grandparents resemble no one in my family. None of them look like any of the ensuing offspring. I look like my dad. My son, Pete, looks like me.

Did I really want to go down this road?

In my mind, my grandparents will always be my grandparents no matter what I find out. My grandmother, in her late-60s, would take her rug muffin [sic] grandchildren to the movies and to the 12th Street beach. She had a folding chair, and she would sit and wait with us at the Roosevelt Street bus stop. She did a lot for us.

I loved swimming in the 12th Street Beach. I never would have had that experience if not for my grandmother. She cared about us.

I loved the movies except for a horror movie that was in Spanish. I was afraid for about a week after watching it. I was about six years old.

She fed us when we visited her apartment down the street on Peoria. She fed me my first jalapeno when I was about five. She and her husband laughed about it. It was a rite of passage, and one of my dearest memories of them. She was performing an important ritual. I cannot live without jalapenos and spicy foods.

I searched census forms from the 1930s, line by line, of every residence in the Taylor Street area. I looked at immigration records, marriage records, death records, and I sent out a few smoke signals and gave offerings of fried bread and jalapenos to the family tree gods.

I made flowcharts comparing the DNA evidence and the relationship between these two people and me. I developed a hypothesis that the older man had to be either the first cousin of my mother or her brother.

I hit dead ends in my search for more information. I felt hesitant to call to contact the man. What does one say?

“I think that your mother or your aunt gave up your older sister/cousin for adoption. I have no evidence, it is just a hunch.”

I do not think so.

There was one other person who was listed as a close relative. She had a family tree with about 3,000 people listed on it, but it was private. I contacted her and asked for permission to look at her extensive family tree. I explained that we probably shared a common ancestor from one hundred years ago. I was hoping that her family tree would provide some vital clues to help me determine how we are related. She granted me permission, but she added that she doubted if we were related. She said that she had no Gonzalez in her tree.

Looking at her tree was an eye opener. I immediately found a link between her and the two people who are closely related to me. I asked her about the two. One was the granddaughter of her aunt. The other, the 73 year-old man, was her first cousin.

She said that all her family lived in the Taylor Street area. She was not sure if we were related.

I asked my mother if she knew this Aunt Zuzu. My mother’s voice picked up with excitement when she heard Zuzu’s name. She said that Zuzu was her cousin.

Cousin? But she had no relatives in Chicago. How could she be related? She said that my grandmother wanted her to address Zuzu as her cousin Zuzu and to call Zuzu’s mother dia Maria.

I asked her the name of Zuzu’s mother. She answered. It was the exact name of the mother of the person who I hypothesized was the biological mother of my mother. Dia Maria most likely was my mother’s grandmother.

It was a tangled web.

Zuzu’s mother was a close friend of my grandmother. Who else would you trust with your grandchild but your good, trusted friend?

It made sense. Was Aunt Zuzu my mother’s biological aunt? Was her sister the teen who gave up her daughter, my mother, for adoption? It was during the Great Depression. She came from a large family. She was only 14 when she became pregnant.

Was I solving this puzzle that I thought was unsolvable? I had thought that anyone who would know the truth about my mother was long deceased. But here I am, on the cusp of putting in the last few pieces of this puzzle.

Her mother was right there all the time. It was the older sister of her friend, Zuzu.

The owner of the huge family tree confirmed that her aunt had given up her child for adoption. She had heard that family story.

Her parents will always be her parents.

She finally found out the truth and received the answer to her doubt. It all fell into place like it was preordained. We were meant to know the truth while she was still alive.

In her last response. the woman with the huge family tree addressed the message to cousin Pete. I smiled when I read it.

I finally have a cousin. I am no longer the only Mexican in the world sin primos.

One thought on “Cousin Connection #5: Family Lost and Found”